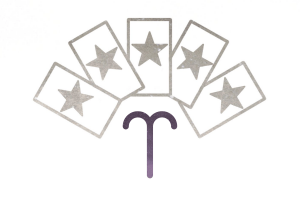 In Tarot, zodiac sign Aries is symbolized by the fourth card in the Major Arcana, the Emperor.

The Emperor is traditionally depicted as a king sitting on a throne, staring straight into the eyes of the card holder. He’s a lone figure—sitting high up in the tarot card to indicate his superior hierarchical status. With such emphasis on confidence and natural leadership, this card embodies many positive and negative traits of bold Aries.

In a positive light, both Aries and the Emperor establish leadership and grace. They are associated with guiding others to their best life (at least, in the way they see it). Like Aries, the Emperor makes a great leader because he has unyielding self-confidence.

Ultimately, this tarot card serves as a reminder for Aries to control that “my way or the highway” attitude and to understand there may be other ways of doing things than his own.