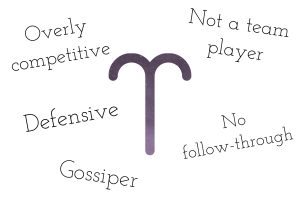 What’s really cute and sometimes frustrating about an Aries is that the same traits that make them a saint can also make them a sinner.

Defensive: This sign’s need for constant challenge means that unless they’re the boss, they tend to rub authority the wrong way. They will constantly question a higher up’s choices and chirp in with a “yeah, but” that will drive even the most patient boss crazy.

No Follow-Through: Since Aries does best with quick fixes and tasks that can be completed in a short amount of time, they’ll struggle with those projects that take a long time.

Gossiper: While everyone loves an Aries for their great conversational skills, the truth is that too much chatter in the workplace often makes them the office gossip.

Overly Competitive: Another weakness likely to become a struggle is that Aries has a hard time with those who challenge them.

Not a Team Player: Aries wants all the good jobs, the best office (preferably corner), the highest floor, and it goes on and on. In fact, it doesn’t stop.