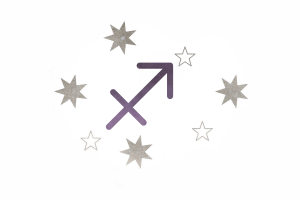 The symbol for Sagittarius is said to depict a Centaur or an Archer. While most signs have an animal for their symbol, Sagittarius’s symbol holds special meaning in its departure from that norm. In most cases, the Sagittarian glyph or symbol is seen as an arrow pointed upwards.

The arrow is indicative of Sagittarian’s sheer will and determination. When there’s something that a Sagittarius wants, they get it. There is precious little that will stand in their way—including those pesky things like jobs, responsibilities, bills, and the like.

Always turned upward, the arrow shows Sagittarius’s typically upbeat, positive outlook. They are the first to see the silver lining of just about any situation and can help lift others to the same vibration. They are also incredibly smart and philosophical about the higher concepts of life and its meaning. They want to know and understand that which remains hidden from most.