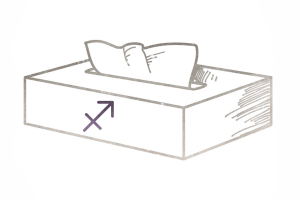 During… Sagittarians tend to have a very weird reaction to breakups. First, if they’re the one who was dumped, they will be a little peeved they didn’t come up with the idea first. Like all fire signs, they want to be the one doing the dumping rather than having their ego bruised by being the one dumped.

After the breakup… Sometimes they will go into full stalker mode. We’re talking numerous texts, showing up at your house at all hours of the night… But if you’re truly done, despite the ways in which they may push those emotional buttons, you’ll want to make sure you do not engage. If you give them an inch, a Sagittarius will take a mile.

Long-term… Thankfully, this sign tends to bounce back rather easily. While there may be a period of some pretty serious emotional turmoil and wacky behavior from Sagittarius, eventually they will find another adventure or person to distract themselves with.

Sagittarius breakup secret… Don’t expect to be friends after. Sags will do their best to stay as clear from you as is possible.