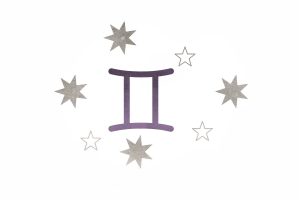 When you think about Geminis, you probably think about their sometimes bipolar attitudes, right? So, it’s not a surprise to most people that air sign Gemini, ruled by logical Mercury, is symbolized by the lively Twins.

In Greek mythology, the Twins are based on the story of Castor and Pollux, two brothers who shared the same mother but had different fathers. While not technically considered “twins,” the two brothers were inseparable and known for their fun adventures. When Castor (who was mortal) dies, Pollux (who was immortal) can’t face living without him, and when he begs his father Zeus for help reunite them, Zeus makes Castor immortal as well so they can live together forever as the constellation Gemini, the Twins.

The Twins is the perfect symbol is for Gemini, given that their personalities are described as social and outgoing one minute and restless the next. Always ready to have a good time and often seen as the life of the party, Geminis are spontaneous, intelligent and endlessly witty and engaging types—but can be unreliable and petty, too. Which side of Gemini will you get? You just never know!

< Previous — Gemini Personality Next — When Is Gemini Season? >
Read your Gemini Horoscope