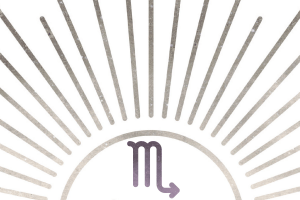 That one friend that always calls you on your BS? Scorpio rising. Scorpio rising or Scorpio ascendant people don’t entertain superficiality. This is a rising sign that craves depth and has an intuition that’s almost intimidating. There is a power and confidence to them that can feel overwhelming, or oftentimes, intriguing to others.

Ruled by the planets Mars (planet of war, aggression, and sex) and Pluto (the planet of death, transformation, and sex), there’s a reason people are lured in by their captivating charisma, while being simultaneously terrified of their straightforward demeanor. Scorpio risings are natural researchers; they love to dive deep and want to know everything about the people they hold dearest.

But they also happen to be the most private rising sign. So, while they expect you to share your soul and deepest secrets with them over a glass of wine, they also expect you to respect their privacy and decision to keep their secrets to themselves. Hypocritical? Yes, but with reason. Pluto, one of their chart rulers, is a planet that also represents power. Knowledge is power. The more you know about a Scorpio rising, the more you can use against them. Make sense?

< Previous — When Is Scorpio Season? Next — Scorpio Moon >
Read your Scorpio Horoscope