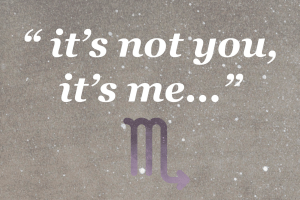 During… Scorpios view breakups as a complete betrayal of trust, so they aren’t likely to be the sympathetic or understanding type. If they aren’t the ones who initiated the breakup, their emotions will range from numb to angry to vengeful. But you’ll probably never know which one they’re truly feeling.

After the Breakup… Scorpio has two well-known post-breakup moves: either withdrawing completely or finding a way to get revenge. All of the stuff they say about “hell hath no fury like a woman scorned” completely applies to Scorpios! If Scorpios have any tea to spill about their ex, this is the time they’ll start spilling it. (Spoiler alert: It won’t be pretty.) On the other hand, a Scorpio can easily choose to remain completely silent about the breakup.

Long-term… Once Scorpios get over their initial shock and pain of a breakup, they have the remarkable ability to recover and come out the other side a better person. This is where thoughts of revenge cool, and most Scorpios realize that while revenge is sweet, it has a bitter aftertaste. It might be some time before they trust someone else enough to get close to, so Scorpios don’t typically jump into a new relationship soon after they’ve been dumped.

< Previous — How to Seduce a Scorpio Next — How Will a Scorpio Dump You? >
Read your Scorpio Horoscope