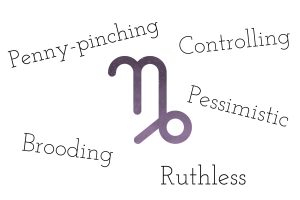 While Capricorns have a lot of strengths and talents, they do have some weak spots that they don’t want you to know about.

Pessimistic: Capricorn has a no-nonsense, realistic view of the world, which means that they have a very cynical view of the world, as well. They see the glass as half empty, bracing themselves for the worst possible situation. Capricorns rarely appreciate when things are going right in their world.

Ruthless: Lord help you if you get in-between a Capricorn and their goal. When a Capricorn wants something, they will do whatever it takes to get it—even things that would raise the eyebrows of other zodiac signs. Capricorns are loyal and caring to their friends and family, but could easily sell-out co-workers and acquaintances to get ahead. They aren’t afraid of getting their hands dirty and taking advantage of any opportunity.

Brooding: Serious and stubborn, when Capricorn doesn’t get what they want, or feel that life is being more unfair that normal, they will start brooding. Their natural pessimistic viewpoint on life, coupled with being overworked, could lead a Capricorn to feel pretty sorry for themselves.

Penny-Pinching: Capricorn can be tight with their cash—not willing to part with a cent if they could help it. They are types who break out the calculator when a group of friends goes out for dinner. They’ll wait until something is broken before replacing it, even if they have money to replace it sooner. They want money because money equals status and success, which means a lot to them.