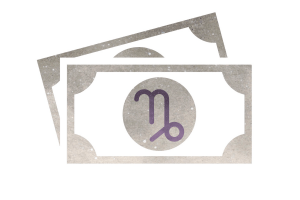 Capricorn will make a lot of money in their lifetime—and most of that money will stay in the bank. Some will go into some smart investments. They like having a large “rainy day” fund to make them feel safe and secure. Capricorns could be millionaires and they’ll still be clipping coupons. They believe that full price is the “sucker” price, and they’ll continue to brag about the deals they got. They are the type of people who still have had the same phone since 2010 with a cracked screen. “It still works, why get a new one?”

When a Capricorn does have to make a new purchase, they will spend hours doing agonizing research trying to find the best product for the best price. In their youth, Capricorn will be very careful with their money, so generally they’ll build a nest egg early. They want to live comfortably later on. Capricorn might retire early or be more willing to spend their money later in life.