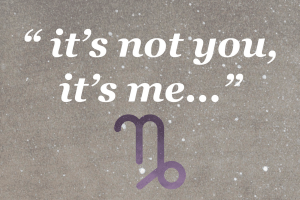 During… If a Capricorn is getting dumped, he or she will be quiet and stoic during the process. Capricorns won’t ask why, and their pride will stop them from begging their ex to take them back. They are just waiting for the conversation to be over so they can leave. The ex might feel like Capricorn didn’t care at all because they didn’t have a reaction to the relationship ending. But that isn’t true at all: Capricorn cares deeply and will be devastated when a relationship is over. But they won’t be vulnerable to someone who is breaking their heart.

After the breakup…  After the breakup, Capricorns will throw themselves into their work, staying late and working overtime. This is meant as both a distraction and because they are building new dreams and goals for themselves. Capricorn will block their ex on social media and even delete their number—even if the breakup went OK. Out of sight, out of mind.  They will be a lot moodier and brooding than normal.

Long-term… Pain and struggle are common for Capricorns as they adjust to the highs and lows of life. In time, Capricorn can laugh about their breakup, but they are not quick to move on. Oftentimes petty, Capricorn may resort to looking at their ex’s social media and compare how successful their ex is to how successful they are. If the ex is more successful in life and has moved on into a new relationship, Capricorn will be salty. If Capricorn is the more successful one, they’ll be pretty pleased with themselves, making it easier for them to move on.