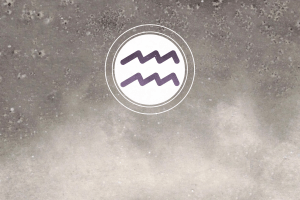 Aquarius is ruled by Uranus, a planet that represents freedom, revolution, and experimentation. According to mythology, Uranus ruled over the cosmos when there was no time or order. He was eventually killed and replaced by his son Chronos, the god who created structure. So, it’s no wonder Aquarians have such difficulty with routine! Because Uranus existed before time, Aquarians can be wiser than their years and ahead of the times in terms of their interests and ideas.

Uranus is associated with rebellion, something unconventional Aquarians embody fully! During times of unrest or political turmoil, it’s useful to note where Uranus is in the sky, as it controls progressive momentum. Uranus also controls technology and innovation. (In fact, Thomas Edison was an Aquarius).

Uranus is a slow-moving, outer planet (also called a generational planet)—taking about 84 years to complete a full transit. Once a year, Uranus stations retrograde for about five months. During this time, you’ll see major shake ups related to whichever sign it is retrograde in. Whether you’re dealing with career, love, or your personal ideologies, Uranus is sure to make you question and reform your life when it shows up.