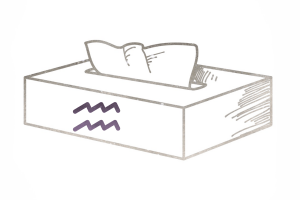 Once an Aquarius decides to make a commitment, they go all in. While it may take a while, when they find someone that understands them (and a relationship structure they’re comfortable with), a breakup can be a pretty major blow in the long run.

During… Aquarians rarely put their relationships front and center at the expense of their career, interests, and friendships—so during a breakup they’ll have a lot of things to throw themselves into.  In fact, it might seem like they’re doing better than ever!

After the breakup…Even though Aquarian breakups aren’t usually dramatic or filled with blame, this sign rarely wants to stay friends after a breakup. They don’t hold grudges, but they also have little patience for the complex emotional dynamic that comes with friendship with an ex. It’s easier for them to move on with a clean slate.

Long-term… This tendency to think rather than feel can be frustrating if they don’t have closure or clear reasoning why the relationship failed.

Aquarius breakup secret… While Aquarians seem to be doing well post-breakup—by seamlessly going back to work, connecting with friends, and pursuing their hobbies—if they don’t take measures to identify their emotions, an old relationship can leave lasting scars.

< Previous — How to Seduce an Aquarius Next — How Will an Aquarius Dump You? >
Read your Aquarius Horoscope