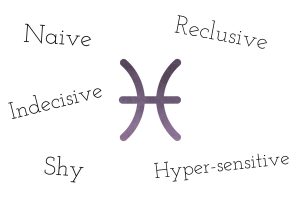 Pisces never intends to hurt anyone and rarely does so on purpose, but their weaknesses often lead to self-inflicted pain.

Hyper-Sensitive: Pisces natives like to live in their own little dream world, filled with fantasies and fairy tales. So when something comes along to burst that little bubble, they get upset and labeled as oversensitive. While this might not be fair, their reputation as one of the more sensitive signs is well-deserved.

Indecisive: The glyph for Pisces is of two fish swimming in opposite directions, which is very representative of them most of the time. There are so many options in life, and Pisces natives can have a very difficult time making decisions.

Reclusive: Pisces natives are perfectly happy at home alone spending time in their head, but it becomes a problem when they start passing up all forms of social interaction. And Pisces’ legendary laziness contributes to their reclusiveness, at times.

Shy: Pisces natives’ quiet form or demureness can be attractive, but their shyness can also be an issue. This zodiac sign can actually have crippling shyness from time to time in the form of panic attacks and extreme anxiety. Any Pisces wishing to become more outgoing should go about it slowly. It’s a process.

Naïve: Pisces natives are said to be accepting of people and situations a little too easily, which contributes to their naïveté. This zodiac sign wants to believe that everyone has the best of intentions, no one is out to hurt them, and this can truly get them into trouble at times.