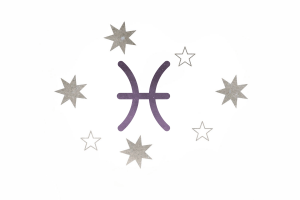 The symbol for Pisces is two fish swimming in opposite directions, held together by a chord so as not to lose one another. This symbol hints at some of the dual-facing qualities of a Pisces. While the Two Fish can be intuitive, dreamy, and sensitive, this zodiac sign can also be manipulative, filled with hidden agendas and a bit delusional.

You know that phrase, “You drink like a fish?” Perhaps a Pisces had some influence over that phrase. Pisces natives can be prone to escapism. Anything in the name of numbing out from the reality of their life, Pisces natives are more susceptible.

< Previous — Pisces Personality Next — When Is Pisces Season? >
Read your Pisces Horoscope