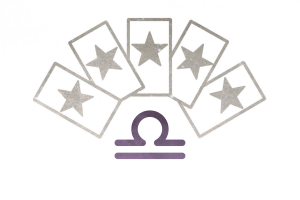 As the eleventh card of the Major Arcana, Justice is the one most associated with morals, ethics, and our sense of righteousness. In Tarot, Justice is depicted sitting between two pillars, symbolizing balance. Justice holds a sword in one hand, representing logic (channeling some serious air sign energy here). And in the other hand, Justice holds a set of scales, representing equality.

Seeing as Libra strives to keep logic and equality at the highest level of importance, the Justice tarot card aligns perfectly here. Even Justice’s number, 11, visually represents balance: two numbers of equal proportion on each side.

The balance in life that Libra so often tries to keep (and may even struggle with—particularly in relationships) is perfectly represented in Justice’s sense of ethical compass. It’s a tarot card that suggests there’s a decision ahead for us—one that often has to do with weighing between our head and our heart.