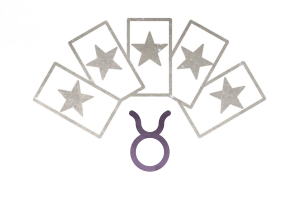 Taurus is represented by the Hierophant, the fifth Major Arcana card. Also known as “The Pope,” the Hierophant typically displays a male figure holding a Papal cross while sitting on a throne. While in newer tarot decks, the cross could be symbolized in other ways, it ultimately indicates his religious stature and his access to deep spiritual knowledge. The two pillars on either side of him symbolize the polarity of spirituality: having faith in the heavens while also being grounded here on earth.

With this divide, one of the things this tarot card teaches Taurus is to appreciate the comforts of things seen and unseen. It’s no doubt Taurus has a tendency toward materialism, and the Hierophant teaches the idea that true happiness comes from the heart and not material things.