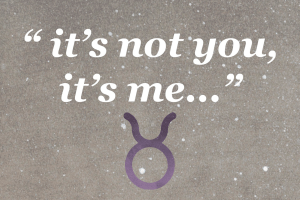 During… If Taurus isn’t the one initiating the breakup, prepare for a fight. A Taurus will keep a dying relationship going for much longer than it should because they’re afraid of change and like the stability the relationship provides. If they cannot argue their point and the breakup happens, Taurus will not show any emotion. They’ll prefer to cry when they’re alone. Taurus will make it a point to collect all of their stuff before leaving. If a Taurus is going through a divorce—they’ll duke it out in the courts.

After the breakup… After the breakup, Taurus will be completely and emotionally devastated. Taurus rarely get involved with people who they don’t see a future with, so it’s the end of a future they were sure they were going to have with that person. To cope with the loss, Taurus natives might self-indulge in their favorite vices to ease the pain.

Long-term… Taurus take a long time to heal from a breakup because they have to re-learn a whole new routine. Taurus is not known for their adaptability, so it will take a while for them to develop a new routine. Once they do, they’ll slowly move on from their past relationship. Taurus is strong and enduring, they’ll learn from this relationship and grow. They will use what they learned from the relationship in their next one.

< Previous — How to Seduce a Taurus Next — How Will a Taurus Dump You? >
Read your Taurus Horoscope