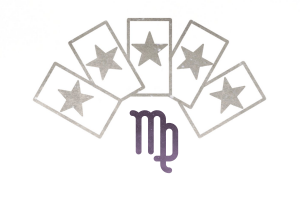 Many people might find this pairing odd, but there are actually many reasons why Virgo is associated with the Major’s ninth card: the Hermit.

The first is Virgo’s attention to self (and a higher sense of self, at that). Typically, this tarot card depicts a lone figure walking through the darkness while holding a lantern. In his right hand (the side of the subconscious mind), the Hermit holds a lantern. Inside the lantern, there is a six-pointed star (also known as a “pentacle” or the Star of David)—symbolic of connection to spiritual forces. In the Hermit’s left hand (the side of the conscious mind), he holds a staff—which he uses for guidance. Putting these two images together, we can really see Virgo’s attention to one’s self (conscious mind), while also being able to see the greater good of humanity (subconscious mind).

The Hermit has the association of a service-oriented figure, but it approaches “service” as a way to service one’s self. In fact, the card acts as a reminder for Virgo to make sure to take time for one’s self when needed.