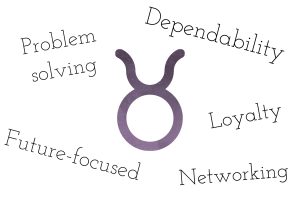 Dependability: If Taurus natives say that they’ll do something, consider it done. You can count on a Taurus for anything: showing up on time, meeting deadlines, fulfilling quotas—all without being told twice.

Problem Solving: They can turn an idea into a tangible reality. Taurus manifest visions using hard work and persistence. They think of a big project as pieces of a puzzle, enjoying the challenge of figuring out how to put it all together.

Networking: One thing you’ll never catch a Taurus doing is getting involved in petty office politics. They hate drama and will avoid it at all costs. Not because they hate conflict, they just think it’s a waste of time.

Loyalty:  A Taurus is deeply loyal to their company, co-workers, and clients. Once a Taurus is established in their workplace, it’s highly unlikely they’ll leave or look for another place of employment.

Future-Focused: Taurus isn’t only thinking about the present, they are thinking many years down the line. Ask Taurus about their five-year plan, they got it written out step-by-step.