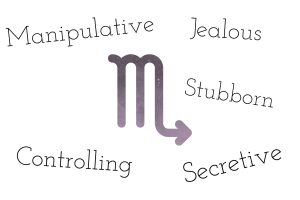 Scorpios are pretty close to perfect (or so they would have you believe), but their obvious weaknesses can’t be ignored.

Jealous/Suspicious: Scorpio likes to completely possess the things and people that they love, which can make them extremely jealous at times. The reasons behind their jealous tendencies vary, but it’s usually because they’ve attached themselves so deeply to someone that they don’t want anyone else to have what they have.

Stubborn: Once a Scorpio has decided something, good luck convincing them otherwise! Most Scorpios think they know best (because they often do), so it’s even more difficult to prove to them that maybe just this one time they might be wrong.

Secretive: This weakness is an extremely hypocritical one, because it’s the Scorpio friend who wants to know all your deepest secrets. Why, then, won’t they return the favor and share a few of their own? It has to do with vulnerability, and Scorpio’s need for control. Scorpio natives will want to hold their own secrets close to their chest, as it’s important for them to maintain having the upper hand.

Controlling: If there’s one thing that Scorpios need to be satisfied in life, it’s control. Not over others (although they don’t shy away from this), but more of themselves and their own situation. They hate to appear as though they aren’t in charge of themselves or their own emotions.

Manipulative: Most Scorpios are smart, resourceful, and cunning. At times, they will attempt to manipulate a situation to fit their expectations and desired outcome. And they have the ability to do it seamlessly, so you don’t even know it’s happened!