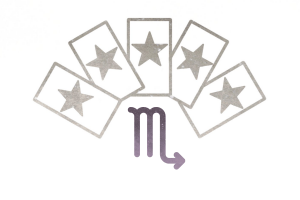 Ah, is it any wonder why the most intense zodiac sign is also associated with one of the most intense cards? While many people fear the Death card (and Scorpios, too, probably), it isn’t as scary as it looks. In fact, because it represents evolution, Death indicates that new beginnings are on the way.

In Tarot, Death is typically pictured as a skeleton dressed in black armor, riding a white horse. The skeleton represents the parts of us that are left after death and the armor signifies strength to move forward. Basically, this tarot card suggests that even after the worst disaster, there’s always something leftover to work with and grow from. Thus, Death doesn’t always mean “the end” of something.

With such a beautiful perspective on endings, this card really speaks to Scorpio’s keen interest in all things dark, mysterious, and even morbid. Ruled by the transformative eighth house, Scorpio constantly seeks to find the ultimate truth—the good, the bad, the beautiful, and the ugly—so it can use that information to find something beautiful within.