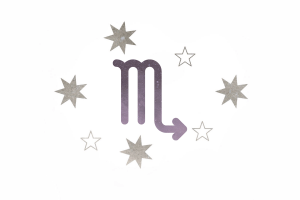 Scorpio’s symbol is aptly the Scorpion: a nocturnal creature that, quite frankly, wants to run and hide as opposed to giving warm cuddles. But such is the nature of Scorpios: One moment, they make you want to get close and snuggle up, and the next, they do or say something that stings you right to your core.

It is said that the stinger in the symbol or glyph of the Scorpion is an indication of Scorpio’s insatiable sexual appetite. Whatever it may be, it’s clear that to mess with Scorpios is to risk the intense bite they have if you’re not careful.

Scorpions are not afraid of the dark, shadowy spaces. In fact, they prefer them and will often hide under rocks, logs, or buried holes during the day—coming out only once the sun has set. Now, if you’ve ever met a Scorpio, you already know that if it’s not deep, they’re not interested. Scorpios crave going into the shadowy spaces within themselves, as well as those close to them. They need to understand what makes you tick and how you became who you are.

< Previous — Scorpio Personality Next — When Is Scorpio Season? >
Read your Scorpio Horoscope