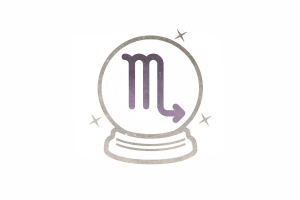 Scorpio’s reputation as the darkest sign didn’t come about for no reason! Scorpio is closely associated with the unknown, the underworld, and magic. Scorpio natives’ intuition is the stuff of legends. Scorpios have the reputation of being dark or negative, but that’s mainly because some of their psychic abilities are misunderstood.

Scorpio’s connection with the spirit world is partly based on their rulership of the eighth house of death and regeneration. In modern astrology, this zodiac sign is ruled by Pluto, a planet associated with Hades, the god of the underworld, and is closely aligned with post-death experiences like reincarnation. Many Scorpios believe that we move on to higher forms after death and, because of this, Scorpios make excellent professional mediums, psychics, and séance leaders.