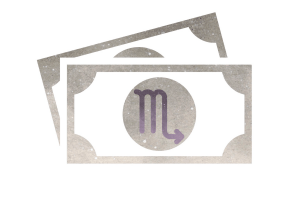 Scorpios are dedicated money makers and like to set financial goals for themselves and/or their families. They do pretty well on a budget, but they do like to splurge occasionally when they feel they deserve it. Because Scorpios tend to get addicted to things easily, they can become shopaholics if they don’t put that famous Scorpio willpower into place. They are generally good savers and like to have a nice stash of money put away for a rainy day.

Scorpios rule the eighth house, which includes other people’s property and large sums of money, and can be an indication that Scorpios often inherit money and property. They take pride from being named in wills and know that it’s a great honor for others to think of them in this way. Because of their trustworthy natures, they are often named executors of wills, and can be very successful in careers that involve working with other people’s large fortunes.