How Will a Libra Dump You? 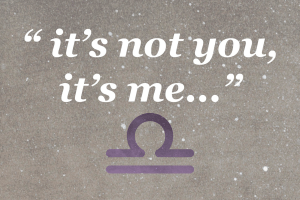 If they do decide they need to end things, being dumped by a Libra might not feel like being dumped at all. They’ll try to find the most equitable solution, and may not even call it a breakup. (It’s no coincidence that it was Libra Gwyneth Paltrow that came up with the term “conscious uncoupling.”) Because Libras don’t take breaking up lightly, they’ll be prepared to give you a well thought out explanation as to why they’ve taken this step.

Even if you don’t want to stay friends after the breakup, Libra hates awkwardness and discomfort. So after some time, they’ll probably win you over and convince you to become friends.