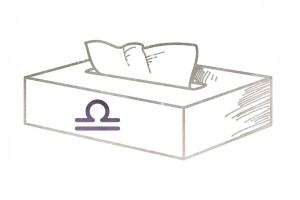 During… Relationships are an important part of a Libra’s life, so they take breakups hard. It’s probably their worst-case scenario, and they’ll try to avoid it—even if the writing is on the wall and a relationship hasn’t been working for a while.

After the breakup… After the dust settles, they’ll spend time trying to understand what happened and potentially realize what they were missing in that relationship. Dealing with their emotions can be difficult, so Libra is likely to take some culture cues to soothe themselves—funneling their feelings through art, sad movies, or heartbreaking love songs.

Long-term… If you fast forward a few months after a Libra’s relationship has ended, chances are you’ll find them in a new relationship! Libras hate staying single for long, making them prime serial daters and monogamists. They’ll be back on the prowl for a new partner in no time.

< Previous — How to Seduce a Libra Next — How Will a Libra Dump You? >
Read your Libra Horoscope