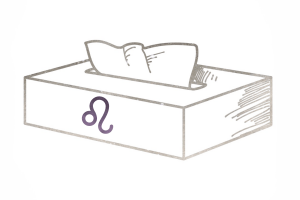 During the breakup… To put it plainly, Leo doesn’t deal with a breakup—they fight it. They may put up a small fight in the form of a little extra effort. They may attempt to make you jealous so you realize what a catch they are. And if they’re really desperate, they may bring in reinforcements in the form of friends and family that still adore you. If all else fails, they’ll find a way to dump you instead.

After the breakup… Their insecurities will run rampant. They’ll feel like they weren’t good enough for you—which then spills into the idea that they must not be good enough for anyone. A Leo will go from fierce lion to delicate and easily breakable kitten.

Long-term… The good news is that Leo has too much pride and won’t stay here for long; soon they’ll find someone else to distract them.

Leo breakup secret… While a Leo will be completely heartbroken over a lost relationship, their ex will never know this. With pride that can fill an entire room, Leos always put on their best face—in person and on social media.

< Previous — How to Seduce a Leo Next — How Will a Leo Dump You? >
Read your Leo Horoscope