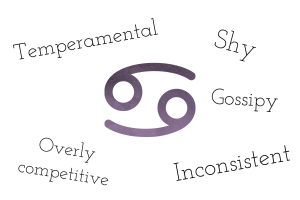 Temperamental: Also referred to as moody or unpredictable, this character flaw is a pretty difficult one to deal with when it comes to business. While there are certain careers where this behavior is tolerated more than others, for most of us working normal jobs, moods swings aren’t really encouraged.

Shy: While it might be refreshing that most Cancers don’t like to brag, their shyness can actually be quite detrimental to their careers. Their introverted nature makes it hard for them to speak up for themselves.

Inconsistent: Because of Cancer natives’ imagination and creativity, they’re always coming up with new ways to do things. Which is great in a creative career where they have full license to do whatever they want, but what about in a job where consistency and routine are important?

Gossipy: It might be hard to believe, but that unassuming, quiet Cancer who sits in the corner cubicle is spreading a nasty rumor about a coworker! They might not be the one who started it, but they have no qualms about spreading it.

Overly Competitive: Despite Cancer’s shy, quiet outward appearance, there often lurks a highly competitive spirit on the inside. Their insecurity can bring out a deep-seated need to prove that they’re better than everyone else.