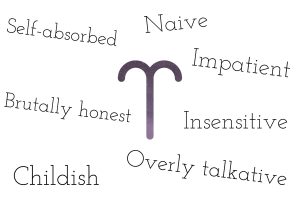 While their flames can warm you up, they can also burn the house down—depending on how close they are. Here are a couple traits that will get them in trouble:

Naïve: Their desire for challenge can put them in compromising positions where they can easily hurt themselves and others.

Insensitive: An Aries’ restlessness has them hopping from one thing to another without regard for others involved which will sometimes come across as self-involved.

Impatient: This is because, ultimately, an Aries gets bored easily.

Overly Talkative: While Aries is a great talker, others can sometimes feel they’re having a one-sided conversation because they never stop talking.

Argumentative: Don’t dare argue with an Aries, because at the slightest sign of that challenge, they’ll rise to the debate before you can even say, “Let’s move on.”

Self-Absorbed: When this sign is in their light, they’ll come off as self-motivated.

Brutally Honest: You see, an Aries’ respect for honesty is something that gives them the opportunity to say whatever happens to pop into their head.

Childish: Although Aries are honest, should you disagree with them, you’re in trouble.