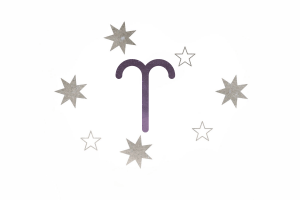 There’s nothing subtle about fire sign Aries, ruled by aggressive Mars! Symbolized by the combatant Ram, Aries too is always ready to butt heads with their competition.

Aries are often thought of as driven, aggressive and sometimes hot-tempered individuals who are ready to take on anyone who dares run up against them, so it’s fitting that the belligerent ram is their Zodiac symbol (glyph). It’s one of the easiest symbols to recognize because it actually looks like a ram’s horns, which are the main tool they use in combat.

Besides the obvious aesthetic reasons that Aries’ glyph is the Ram, Greek mythology tells the story in a little more depth. The myth of Chrysomallus, the Golden Ram, who was called on by Nephele, the goddess of the clouds, to save her children from their own father, is a story of bravery and strength of character. Chrysomallus attempted to help Nephele by flying across the turbulent seas with her children on its back, and the brave Ram was eventually sacrificed to Poseidon and became the constellation known as Aries.

< Previous — Aries Personality Next — When Is Aries Season? >
Read your Aries Horoscope