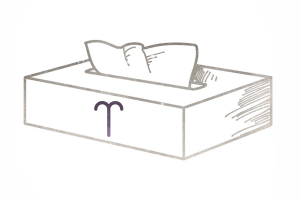 Well, unfortunately, a partner’s disinterest is exactly what reignites an Aries’ original interest. They want nothing more than to have what’s restricted from them.

During… Even if an Aries isn’t feeling the relationship, they’ll refuse to accept failure. For them, breaking up is not an option.  The good news is: Aries is not one to sit around lamenting their broken heart.

After the breakup… Aries will invite an ex to dinner under the guise of finding closure—only for their ex to find a romantic, beachside dinner for two complete with candles and a private chef. For an ex, this could end up coming across as not respecting their boundaries.

Long-term… The good news is that while this sign puts in effort to win, should things be stalled on their partner’s end, it won’t be long before their devotion turns to bitterness and they decide to find someone else.

Aries breakup secret… Though they’ll try to convince you that you’re the love of their life during the breakup, they’ll probably move on faster than you.

< Previous — How to Seduce an Aries Next — How Will an Aries Dump You? >
Read your Aries Horoscope