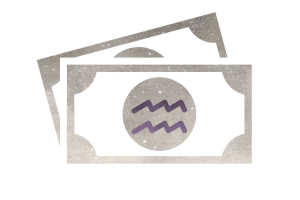 Agile-minded Aquarians are generally good with managing their money—knowing how to invest and save. They aren’t swayed by “get rich quick” schemes, but they do know how to take creative approaches to making money.

It’s good that Aquarians are money savvy, because they are often attracted to careers where a traditional or stable income isn’t a given. Job satisfaction and freedom is more important than a paycheck, which is why many Aquarians make successful freelancers, independent contractors, artists, or work in fields that rely on startup money. Their intellect and ability to keep multiple projects going at the same time is an important skill that helps them stay satisfied and motivated while keeping the lights on.

Ultimately, for an Aquarius, money is a shortcut to two things: independence and philanthropy. Aquarians hate having to answer to anyone, and learning how to make money for themselves reliably and be their own boss (or have enough money to leave a job when it’s no longer satisfying) is incredibly important. They are also idealists who can accept that money can be power. Thus, they will more likely give back to charity or research for causes that are meaningful to them.